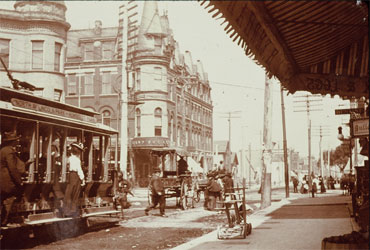 The Wicker Park District has been part of Chicago since its incorporation as a city in 1837. The furthest northwest point of the city was North Avenue and Wood Street. In 1847 the city’s western boundary moved to Western Avenue. By 1853, the heart of what would become the Wicker Park District: North, Milwaukee, and Damen, was occupied by homes on the corners of North and Milwaukee and by a public well on the northwest corner of North and Damen.

Industry first came to the area in 1857 when the Rolling Mill Steel Works opened along the river near Ashland and Armitage. An Irish community settled in that area providing the major source of labor for the mill. Establishing homes and businesses along major avenues, including Ashland and Milwaukee, people pushed further out of the city. Clothing, furniture, musical instrument, cigar manufacturers and breweries, to name a few, would eventually add to the industrial scene of the District.

While the city’s northern boundary moved to Fullerton Avenue in 1863, Wicker Park’s northern boundary was Armitage. Bucktown stretched north from Armitage. The major influx of residential and commercial structures occurred in this part of the city as a result of Chicago’s Great Conflagration (Fire) in 1871. A vibrant community, the Wicker Park District became home to many families that would become vital to Chicago’s growth and prosperity. Included in the list of well known people are the Pritzkers, Uihleins, Crowns, Carl Laemmle (Universal Studios), Michael Todd, Saul Bellows, and Nelson Algren. Unlike other Chicago neighborhoods, Wicker Park had a diverse mix of ethnic and economic residents living side by side.

Germans and Norwegians were the first ethnic groups pushing out of the city along the immigrants’ path to prosperity, Milwaukee Avenue. They were followed by the Jews and then the Poles. Grocery store offerings included “flour, feed, and pressed hay,” while a corset shop guaranteed a perfect fit and repairs free of charge for one year.

In 1900 The Wicker Park Eagle newspaper began publishing “in the interest of Wicker Park and the North-West Side.” Its masthead assured readers that it was “The North-West Sides Most Exquisite Newspaper. Spicy and Clean.” Other businesses included stables (some of which also rented carriages and hearses), blacksmiths, tailor shops, sausage-makers, coal, wood, stone and lumber yards, laundries, greenhouses, milk depots, bakeries, drug stores, dye works, and eventually large department stores.

The District’s development passed through two distinct periods. The first from the mid 1800s through 1929 was the establishment and growth period. The second from 1930 to approximately 1973-5 was a steady, slow decline culminating in a depressed community. Then a slow rebirth was followed by an explosion of development that continues today. Now restaurants and entertainment co-mingle with classy shops that offer everything from couturier garments to contemporary and antique home furnishings.

Contributed by:
Elaine A. Coorens
Historian, Editor & Publisher of Our Urban Times and Author of Wicker Park from 1673 Thru 1929 and Walking Tour Guide