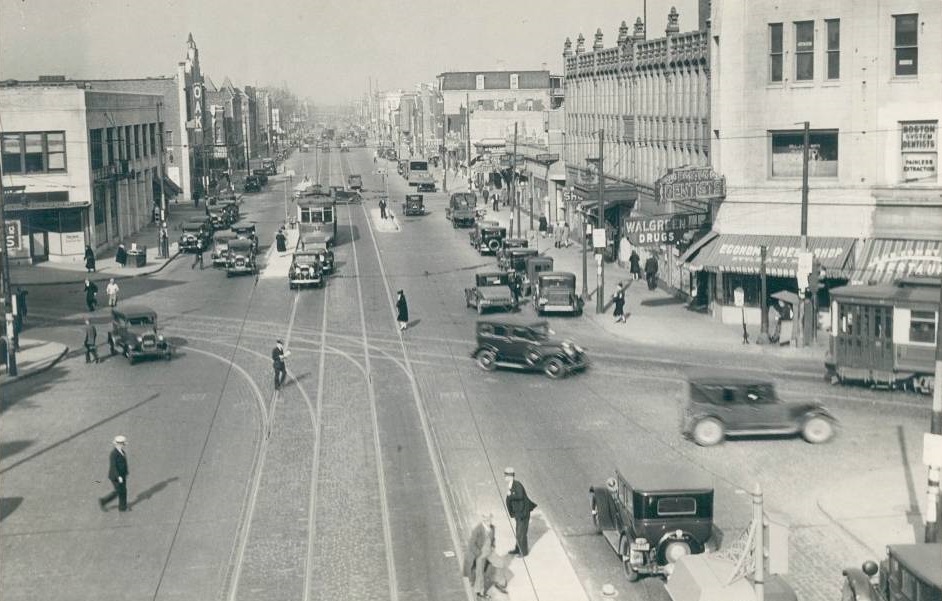 Historically active arts organizations and venues include the Chopin Theater and the Flat Iron Artists Association. The Chopin Theater, built in 1918, at the Polish Triangle, has been home to innovative, international and award winning theater for well over two decades. At the physical heart of the neighborhood, the Flat Iron Building has evolved into a collective of artist's studios whose doors are always open, inviting passersby to take a look. The Flat Iron's 'First Friday' open gallery events kick-start the neighborhood action every month.

Wicker Park and Bucktown serve as excellent cross sections of Chicago's architectural history and has been a part of the city since its incorporation. Walking the streets of Wicker Park and Bucktown allows one to spot architectural gems from the early 19th century up to present day construction. The neighborhoods are home to several registered Historic Districts and registered Historic Places. Browse some of the neighborhood highlights below. 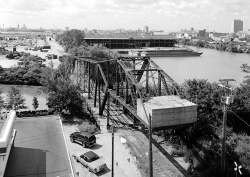 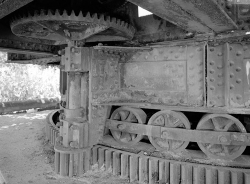 The Chicago, Milwaukee & St. Paul Railway Bridge No. Z-2 is a rare asymmetrical "bobtail" swing span bridge from the late 19th century. Its significance lies not only in its design, but in the role it played in the historic development of Goose Island, carrying the only rail line to the island. In addition, the bridge once carried limited vehicular traffic, making it perhaps the only surviving bridge in Chicago that served combined modes of transportation. The bridge's superstructure is made from 210 tons of steel, with a concrete counterweight weighing 140 tons all of which rest on a circular nest of 40 wheels that support the entire weight of the bridge. When in operation an electric motor engaged the gear mechanism, forcing the span to rotate and swing towards the shoreline. The bridge owes the necessity of its existence to a canal built by William Ogden, Chicago's first mayor, who was the primary backer for its construction in the mid-1850s. The canal allowed the island to function as an industrial core for Chicago, with tanneries, grain elevators, a coal yard and steel mill. Today the bridge's operating mechanism has been disabled and since larger craft no longer use the waterway, the bridge remains locked in position. In 2009, the bridge was restored by the Chicago Department of Transportation and pedestrian and bike paths were installed on the span to connect North Avenue to Goose Island.
SOURCE: THE COMMISSION ON CHICAGO LANDMARKS 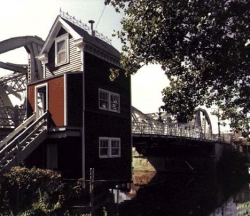 This structure marked a major advancement in the design of movable bridges. The first of its kind completed in the United States, this Chicago-type, leaf-lift (trunnion bascule) bridge became an international model for structures spanning navigable waterways. It also established Chicago as the leader in this form of civil engineering.
SOURCE: THE COMMISSION ON CHICAGO LANDMARKS 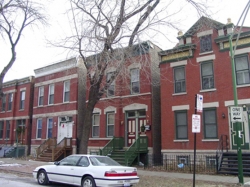 This district of 19th-century working-class housing, located on Chicago's Northwest Side, exemplifies the importance of such small-scale, simply-detailed cottages and small flat buildings to Chicago neighborhood history. This ensemble of buildings was home to German, Polish, and other European immigrants who settled in the area in the late 19th and early 20th centuries. Today these buildings form cohesive residential streetscapes that display the craftsmanship, scale, and architectural styles of buildings that formed the backbone of Chicago working-class neighborhoods developed in the late 1800s and early 1900s.
SOURCE: THE COMMISSION ON CHICAGO LANDMARKS
SOURCE: EAST VILLAGE DISTRICT LANDMARK DESIGNATION REPORT 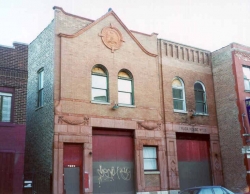 This former firehouse, designed to house horse-drawn equipment, featured a stable and haylofts. It was built in the so-called "storefront"-style to reflect the character of neighboring commercial buildings. Through their history and architecture historic Chicago firehouses like this one represent evolving ideas about the firehouse and fire protection in the City over time.
SOURCE: THE COMMISSION ON CHICAGO LANDMARKS 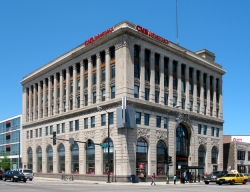 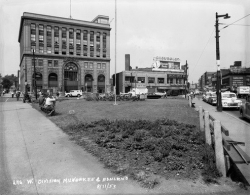 This neighborhood bank building exemplifies the critical role that banks played in the history and development of Chicago neighborhoods in the late 19th and 20th centuries. Built in the heart of Chicago's historic "Polish downtown," this monumental Classical Revival-style building is ornamented with finely-carved low-relief sculpture and has a dramatic banking hall. Vitzthum is a significant architect of several other neighborhood bank buildings in Chicago as well as downtown skyscrapers such as the One North LaSalle and Steuben Club buildings.
SOURCE: THE COMMISSION ON CHICAGO LANDMARKS 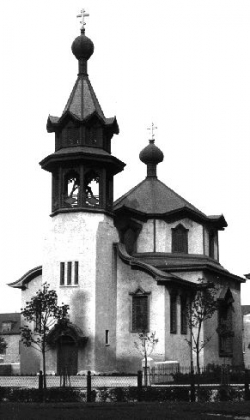 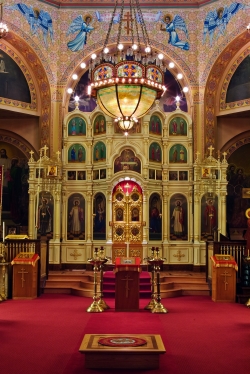 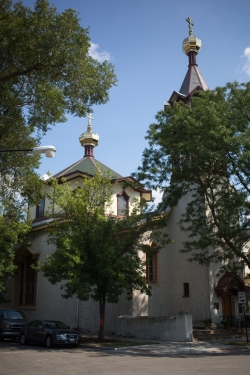 Designed to resemble the Russian provincial churches known to its first parishioners, this elegant church is an unexpected feature of its neighborhood. Even more surprising is the fact that its construction was partially paid for by Russian Czar Nicholas II. The walls of the church are load-bearing brick covered with stucco; the detailing of the two-story rectory repeats the same sinuous curve found in the roofline of the church. The ideologies held by the client and the designer harmonized well in this project, producing one of the most-inspired, small-scale works of influential architect Louis Sullivan. The original congregation organized in 1892 and was Chicago’s first Orthodox parish.
SOURCE: THE COMMISSION ON CHICAGO LANDMARKS 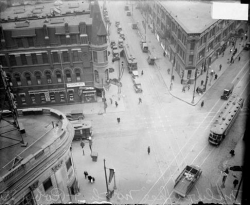 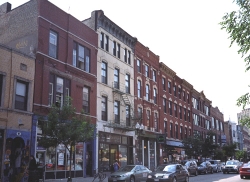 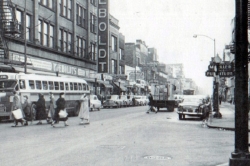 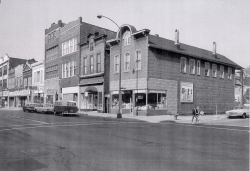 The Milwaukee Avenue District, located in the West Town community area, is one of the most intact commercial streets from the late-nineteenth and early-twentieth centuries in Chicago. The district's broad range of architectural styles is a reflection of its history spanning five decades of development; styles include the Italianate, Queen Anne, Classical Revival, Arts and Crafts, and Art Deco. Milwaukee Avenue began as an early trade route and matured into an important commercial street for Chicago's economic development. Waves of immigration and shifting ethnic populations in the Milwaukee Avenue District convey important themes of the city's social history. The blending of the distinct variety of cultural histories displayed in the architecture of the buildings creates a "city within the city" along the Milwaukee Avenue District.
SOURCE: THE COMMISSION ON CHICAGO LANDMARKS
SOURCE: MILWAUKEE AVENUE DISTRICT LANDMARK DESIGNATION REPORT 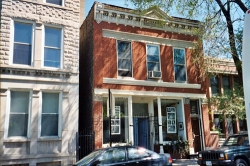 Constructed in 1889, the Richard Nickel Studio at 1810 W. Cortland St. was owned for a three-year-period from 1969 to 1972 by architectural photographer Richard Nickel, a prominent and significant figure in the early historic preservation movement in Chicago. Nickel's passionate, but ultimately unsuccessful, crusade to save Adler & Sullivan's Garrick Theater in 1960 is generally regarded as one of the first and most prominent grass-roots preservation efforts in Chicago. Nickel purchased 1810 W. Cortland in February 1969 and began work to convert it to serve as his home and studio. It is the only building Nickel ever owned, and he used it as a base for his architectural salvage work, storing and photographing architectural fragments there. His untimely and tragic death while salvaging architectural fragments from the Chicago Stock Exchange in April 1972, however, occurred before the studio could be completed. The Richard Nickel Studio retains the majority of the original physical characteristics and design features including its cast-iron street-level storefront with its large display windows, brick and limestone wall materials, and ornamental pressed-metal cornice.
SOURCE: THE COMMISSION ON CHICAGO LANDMARKS 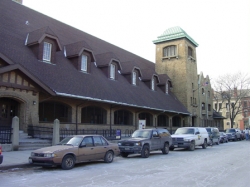 One of Chicago's most distinctive park buildings, this fieldhouse was designed to resemble a Central- or Eastern-European public hall and is noteworthy for its fine brickwork, half-timbering, and picturesque tower. It exemplifies the early 20th-century effort to create neighborhood parks filled with organized activities and programs for working-class Chicagoans. Besides his work designing fieldhouses for the City's West Side parks, architect William Carbys Zimmerman also designed public buildings throughout Illinois as the State Architect during the early 1900s.
SOURCE: THE COMMISSION ON CHICAGO LANDMARKS
SOURCE: PULASKI PARK FIELD HOUSE LANDMARK DESIGNATION REPORT

The Polish National Alliance Building is a significant example of a building constructed by an ethnic fraternal organization that served one of Chicago’s most prominent ethnic communities. Located near the geographical center of “Polish Downtown,” Chicago’s largest and oldest ethnic-Polish neighborhood, the building served from 1938 to 1976 as the headquarters of the United States’ largest Polish-American fraternal organization, the Polish National Alliance (PNA), also known as the Zwiazek Narodowy Polski. The Polish National Alliance Building exemplifies the historic importance of ethnic fraternal organizations, social clubs, and mutual aid societies to the social, cultural, and political development of Chicago’s immigrant communities in the nineteenth and early twentieth centuries.
SOURCE: POLISH NATIONAL ALLIANCE BUILDING LANDMARK DESIGNATION REPORT 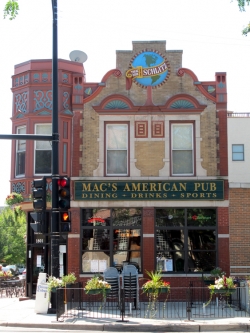 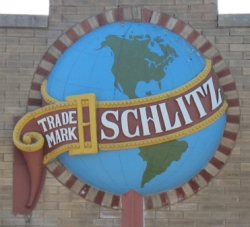 From the 1890s up to Prohibition, brewing companies built and operated their own taverns, or "tied-houses," throughout Chicago's neighborhoods. 1801 W Division was built in 1901 by the Milwaukee-based Schlitz Brewery, and it is one of the best-remaining examples of the tied-house system in Chicago. When it was built, Schlitz had become one of the largest breweries in the nation, and its Chicago market was managed by Edward Uihlein who built at least 57 other tied-houses in the city. The building's high-quality architectural design and cheerful German Renaissance style of architecture was intended to attract customers, and to project a positive image in the face of rising opposition to alcohol and neighborhood taverns. With its stepped and scrolled gable, semi-circular lunettes, strapwork and heraldic ornament, the building exemplifies the German Renaissance Revival style of architecture. Also characteristic of tied-houses, the facade includes the insignia of the brewer, in this case the belted globe of the Schlitz brewery.
SOURCE: THE COMMISSION ON CHICAGO LANDMARKS 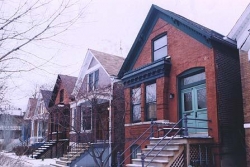 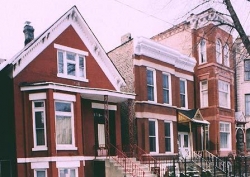 The Ukrainian Village District contains an excellent cross-section of residential building types that provides a visual history of immigration settlement on Chicago's Near West Side. Together, they form an important residential streetscape, one that tells the story of German, Polish, and, ultimately, Ukrainian immigrants who settled in the area throughout the late 1800s and early 1900s. An extremely well-preserved collection of Worker's Cottages, two- and three-flats, single family residences, and large apartment buildings, nearly one out of every three of the buildings in the district was developed by the early influential Chicago real estate developer William D. Kerfoot. The first real estate developer to reestablish his business after the Great Fire in 1871, Kerfoot became the embodiment of the "I Will" spirit of Chicago. He reopened his office the day after the fire ended with a sign on his door reading: "W.D. Kerfoot. All gone but, wife, children and energy." These unpretentious residences feature distinguished workmanship and finely crafted details.
SOURCE: THE COMMISSION ON CHICAGO LANDMARKS 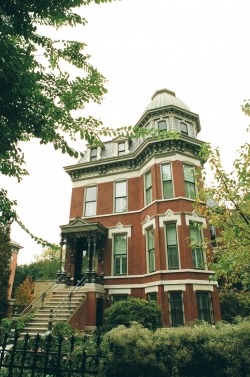 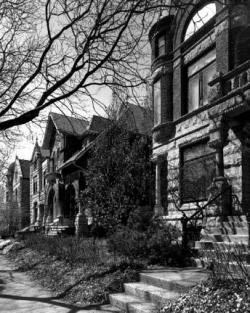 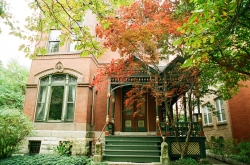 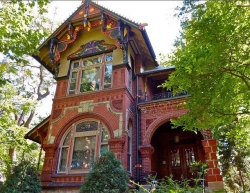 This area is named for the triangular-shaped public park that developer-politician Charles Wicker, and his brother Joel, donated to the city in 1870 (though some historians and records suggest otherwise). The large residences that line the park and nearby streets reflect the wide variety of styles and materials characteristic of Chicago between the Fire of 1871 and the early-20th century.
Pierce and Hoyne streets feature some of the city's largest and best examples of Victorian-era architecture and, due to the large number of brewery owners who built residences on Hoyne, that street became known as "Beer Baron Row." Early inhabitants were largely German and Scandinavian in origin, although a later influx of Polish immigrants led to the area being called the "Polish Gold Coast."
SOURCE: THE COMMISSION ON CHICAGO LANDMARKS 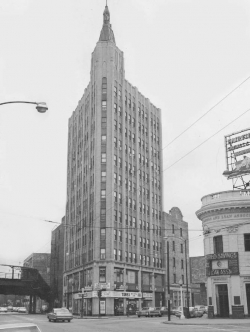 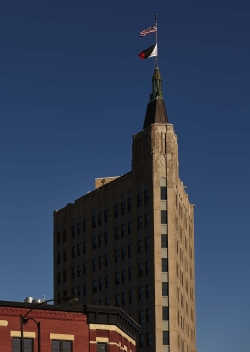 The Robey was first built in 1929 as a 203 foot office building called Northwest Tower. It stands as an excellent example of large scale Art Deco architecture in the neighborhood and is one of the only structures to qualify as a skyscraper in the area. Damen Avenue, along which the tower sits, was originally named Robey Street, which is where the Robey Hotel gets its name. Numerous area streets were renamed, some multiple times, as changes in immigration and the ethnic makeup of the neighborhood shifted over the years.