Image Credit: Kyōsei 9, 2018 by Robert Lostutter as seen in Kyōsei on view at Corbett vs. Dempsey through December 19.

This week's WPB Weekend Arts Guide offers up several distractions from the chances for snow and plenty of ways to stay warm inside some of the neighborhood's galleries and businesses while enjoying local artwork, happenings, discussions and readings. Whether you're looking for a a book by a local author, gifts for the holidays, some exceptional handmades, or an exhibition of artwork with a more critical edge, we've got you covered! Don't miss the shows coming to a close, and be sure you stop by the several opening receptions over the next few days. 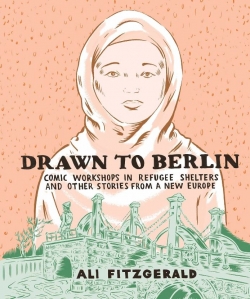 Quimby's Bookstore
Ali Fitzgerald presents Drawn To Berlin
Entwining political and personal displacement, Ali Fitzgerald’s graphic memoir, Drawn to Berlin: Comic Workshops in Refugee Shelters and Other Stories from a New Europe, is about loss, community, and the drawings that bind us. The students in Fitzgerald’s drawing classes are among the record-breaking number of people who are seeking asylum in Berlin, fleeing from countries such as Syria and Afghanistan. They draw images of experienced violence and careful optimism: rafts and tanks, flowers and the Eiffel Tower. Over the course of her decade in Germany, Fitzgerald experiences the highs of the creatively hopeful along with the deep depression of the disillusioned, all while waiting to stumble into her own glory like the great Modernists before her. Her comics are compassionate and unflinchingly intimate, as the fantasy of her bohemia crumbles in a globalized city.
7:00pm 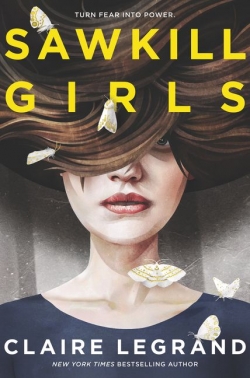 Volumes Bookcafe
Volumes Book Clubs
The bookcafe's monthly Book Club meet up covering a range of books and genres. This month's meeting schedule is slightly different from usual and will be as follows:
Book of the Month: Bird Box by Josh Malerman - 6:30pm
Sci-Fi & Fantacy: Sawkill Girls by Claire Legrand - 7:00pm
Feminism: The Ethics of Ambiguity by Simone de Beauvoir - 7:30pm
Trans & Gay Authors: Amateur: A Trues Tory about What Makes a Man by Thomas Page McBee - 8:00pm 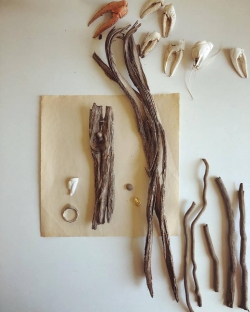 Jackson Junge Gallery
J2Nov9: A Trunk Show with Crystal Hartman and Experimental Sound from Devin Frank and Friends
Artist and jeweler Crystal Hartman will be in the gallery with a heap of mischievous delights, whimsical, carnal, sculptural jewelry that grows from the foxy sincerity that revolts from symmetry and flourishes in stories.Growing up behind the jeweler's bench at Durango Silver Company of southwest Colorado, Hartman carves in wax and casts in recycled metals to create abstract botanical jewelry set with conscious, high-grade stones.Expect silver animals to hold your hand, arrows and turquoise wrapped around your wrist and shot across the heart, totems, talismans, ouroboros, and gardens meant to be held and worn. We will play with the jewels and bask in sound from Devin Frank who's recently released a triptych of experimental music available online and through "Tell Em" Tapes.
6:00pm to 9:00pm 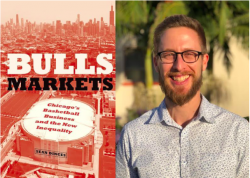 Volumes Bookcafe
Sean Dinces' Bulls Markets
Join us for the Chicago launch and discussion of Bulls Markets: Chicago's Basketball Business and the New Inequality with In These Times contributor, Miles Kampf-Lassin. Sean Dinces is an Assistant Professor of History & Political Science at Long Beach City College. He took his MA in Urban Education Policy and PhD in American Studies from Brown University, and previously held the Allan Selig Chair of U.S. History at the University of Wisconsin-Madison. While a native of Southern California, he has spent many years in Chicago, including a stint as a researcher for the Chicago Teachers Union.
7:30pm to 9:00pm

Agitator Co-operative Gallery
Picturing Silence: Photos, Paintings, and Sound by Spencer Hutchinson
Picturing Silence is a show about the interstitial practice I found myself engaged in after I stopped making electronic music/sound art and began exploring visual art from a fresh perspective. The centerpiece of the show consists of a collection of large photographs of the sides of picture frames, photographs that represent my own Cagean experience of silence that occurred while I was working as a visitor service representative at the Knoxville Museum of Art in Knoxville, TN. The paintings represent my own exploration of sound related themes that carry over into painting. The single sound piece in the show, 8-track sinfonia, is comprised of several hours of music by J.S. Bach slowed down and represented in ambient musical form, a sound project I engaged in while pursuing my reinvigorated visual art practice. - Spencer Hutchinson
Opening Reception 6:00pm to 10:00pm 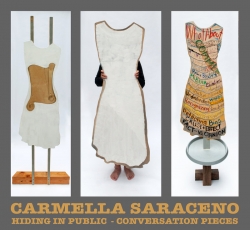 Dreambox Gallery
Hiding in Public - Conversation Pieces
Carmella Saraceno gathers found objects and materials, and through deliberate selection, creates free-standing figures that are constructed from plywood. Each individual sculpture is intended to initiate a conversation. Stripped from their initial meaning, the objects are chosen for their shape, form, and color. In the process, the utilitarian is transformed into something new, yet familiar, ushering the viewer into a place of discovery and fresh insights. Alongside these sculptures, Saraceno is showing a series of watercolors that inform her sculptural work.
Closing Reception noon to 4:00pm

No Nation Art Gallery and Tangential Unspace Lab
CCC Pajama-Rama Drink & Draw Jam
Hey cool kid (or possibly middle aged to very old person), you’re cordially welcomed to the first annual CCC Pajama-Rama Jam and Drink and Draw at {\}() {\}∆‡|(){\} Tangential Unspace Art Lab! So let’s toast to the very best of the Chicago Land Art Jammers! Bring your best set of flannel pajamas and a whole lot of jammed preservatives, some pencils, a sketch pad (or not), for the slumber party-style drink and draw event of the millennium, PAJAMA-RAMA- SLUMBER JAM in the house, mf’s! Join the original Chicago Creative Collaborators Crew and their ridiculous (maybe even kind of sad) nerdy shenanigans as we drink and draw the night away, and possibly have the best PAJAMA-RAMA-DRINK-AND-DRAW PAJAMA-JAM in our lifetime or even eva. Will there be karaoke? Will there be cartoons? Will there be awkward Pajama-Rama style nerdiness? Yes. Yes. And you bet your sweet tooshy, there will be. SLEEPING-BAG ART PARTY y’all!!!!
4:20pm to 4:20am 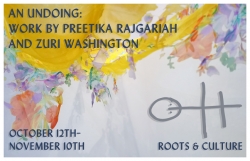 Roots & Culture
An Undoing: Work by Preetika Rajgariah and Zuri Washington
Preetika Rajgariah draws from her personal narrative to manipulate and reappropriate culturally significant materials, such as saris and sindoor, to explore notions of migration and home. Specifically, she concentrates on women in these spaces and uses a number of media to further examine societal standards and gender roles. As a Black American, Zuri Washington’s work relies heavily on the superposition of both the appropriation and eradication of selfhood. Through the making of temporary, vulnerable spiritual structures, they explore and draw upon an ancestral narrative lost to time, violence, and erasure.
Exhibition Closes - Final Day 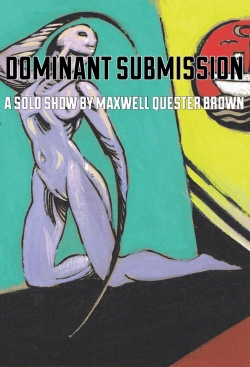 Sideshow Gallery
Dominant Submission
We are super pumped to have our old friend and Brown Brothers Tattoo shop owner Max Brown for his first solo Chicago art show. With plenty of years of good times under our belt, we are looking forward to having Max back again and for him to be exhibiting what he has been up to.
Opening Reception 7:00pm to 11:00pm 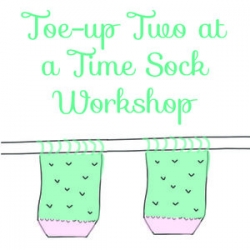 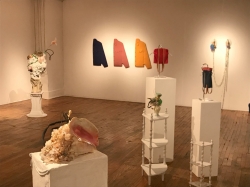 Heaven Gallery
Static Cling Artist Talk
Join everyone at Heaving Gallery as the artists featured in Static Cling discuss their work and ideas behind the exhibition. In their second exhibition together, artists Nico Gardner and Lauren Carter continuously shift between the personal and the general, the specific and ambiguous, creating new work in conversation with each other. With a primary focus on desire, ritual, identity, and the expression of human need, Static Cling addresses the power and persuasive nature of mundane, domestic objects. The artists ultimately create new works that highlight similarities in their decision making while embracing their respective differences. Coffee will be provided.
1:00pm to 2:00pm 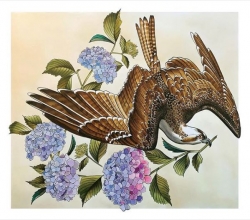 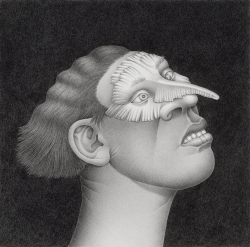 Corbett vs. Dempsey
Robert Lostutter: Kyōsei
It is with pleasure that Corbett vs. Dempsey presents its third exhibition with Robert Lostutter. Entitled Kyōsei, it will feature a suite of fresh works in graphite and a new poem. This show is the ghost that we leave behind. We are pleased to announce that Kyōsei will be the final show in the original CvsD space at 1120 N. Ashland Avenue. We have been here for 15 years and are now excited for the next chapter in a new space... 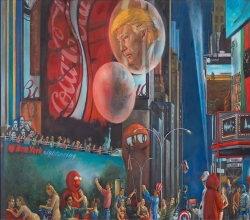 Firecat Projects
Don Perlis: Trumpworld
This exhibition is Perlis' pictorial commentary on today's political and social environment and its pundits. As in the past there have been times that require thought and action. These are one of those times. Don Perlis' recent paintings of super heroes both from the ordinary to the sublime, Trump antics and common everyday buffoons provoke the viewer to ponder our current state of affairs. Including what some people idealize and what is daunted in Social Media. Scenes reflect disparate worlds of have and have nots, the sublime vs. the vulgar, the fantastical to the ordinary. These beautifully rendered paintings depict vignettes that reflect a world that is colorful, bombastic, full of both promise and despair. Perlis pushes the dialogue button. It's arts way to preserve the right for the democratic values of discourse. 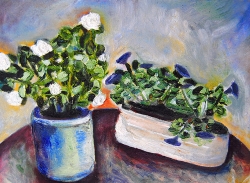 Gallery Cafe
Audriana Jane Vandenoever
Vandenoever's artwork captures the beauty of the mundane that surrounds us with little notice in the everyday. She seeks to develop that essence through sill life or poetic landscapes and to explore the true nature of a moment. 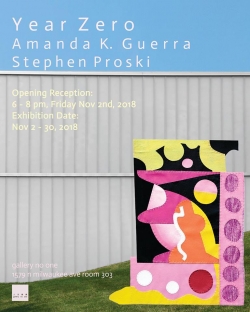 gallery no one
Year Zero: Amanda K. Guerra & Stephen Proski + I can't even
Year Zero presents a collection of photographs and hand-sewn constructions made by artists Amanda K. Guerra and Stephen Proski. Working at disparate levels of the all too teetering spectrum, an architectural photographer and a painter (who cuts up their paintings to make new ones), try to find balance careening through the turbulence of our collective post digital existence. In doing so, both artists reference and utilize various elements of architecture on, off, and around the picture plane.
I can't even is an online exhibition made up of work from seven artists touching on the characteristics of the Internet in varying degrees, providing new modes of thinking for the new media and the contemporary Internet language. 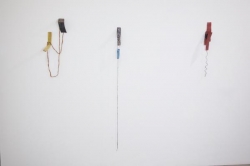 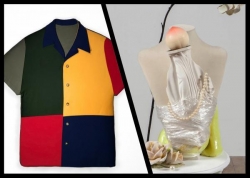 Heaven Gallery
Spectrum of Touch + Static Cling
Marissa and Alex put their bodies of work side by side and similarly put their bodies themselves side by side, sharing their apartment. Without submitting to the conventional abuse of theory for the explanation of art practice; that is a reversal that refers to theory as if it precedes practice; we might find thought emerging from the works in a way other then the awkward positioning of an artist as the translator of ideas to things. In Spectrum of Touch, both Alex and Marissa suggest a triangle of mutual dependence between thought, body and the other.
In their second exhibition together, artists Nico Gardner and Lauren Carter continuously shift between the personal and the general, the specific and ambiguous, creating new work in conversation with each other. With a primary focus on desire, ritual, identity, and the expression of human need, Static Cling addresses the power and persuasive nature of mundane, domestic objects. The artists ultimately create new works that highlight similarities in their decision making while embracing their respective differences. 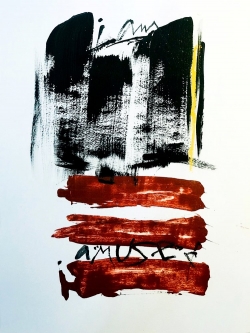 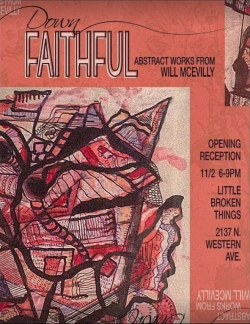 Little Broken Things
Down Faithful
A show of abstract works by Will McEvilly. 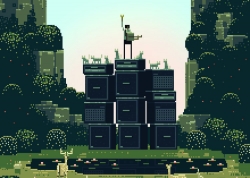 Video Game Art Gallery
Backlog: Five Years Building the VGA Print Collection
Since 2013 VGA Gallery has collected two-dimensional prints related to significant works of video game art. To mark the five year anniversary of our continually growing archive this exhibition will mix the old and the new as well as the local and the international of video game art prints. Never presented as a substitution for the experience of real-time play, prints offer incredible value in the ongoing art history of video games. Whether they are a document of an artist’s process, a capture of a significant moment that might pass by quickly in live media, or a closer look at what is underneath the surface of games, prints expand and explode the highly concentrated storage of concepts and experiences packed into each title.