Image Credit: I Deserve This by Alex Peyton-Levine, as seen in the One Wall exhibition on view now at Jackson Junge Gallery.

It's looking like a gorgeous long weekend ahead and the arts in Wicker Park Bucktown are brimming with things to do and see and ways to stay occupied and engaged over the next few days! Give our latest WPB Weekend Arts Guide a look to make your plans... 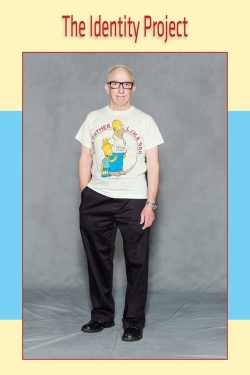 Firecat Projects
Nelson W. Armour: The Identity Project
In leaving his house of 35 years, Armour tried detaching himself from his T-shirts, hats, and other apparel, but was hampered by the memories. They contained too many of the stories and phases of his life. In these self-portraits, Armour is portrayed as an “everyman,” an archetype of people everywhere. The clothes we wear identify ourselves. The tee goes further; it states and projects, either whimsically or seriously. Why has the T-shirt and hat become so universal? Why do we directly advertise our egos and embrace our idols and causes? What are we trying to say?
Opening Reception 7:00pm to 10:00pm 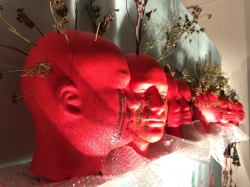 Jackson Junge Gallery
One Wall: Alex Peyton-Levine
The popular ONE WALL rotating exhibition returns for its fifth season, as four different artists over the course of eight weeks create four unique installations that transform the gallery's front window and space occupied by a single wall. The fourth round features Alex Peyton-Levine. Peyton-Levine moved to Chicago in 2015 to receive her Master's Degree at the School of the Art Institute of Chicago. She grew up considering art mostly as a language and tool, rather than an object-oriented practice and states, "Inevitably, I have maintained this relationship to making art, wherein I am more concerned with what my work is saying rather than what it looks like. For me, art has always been a way of looking into myself. I have pursued this career because I embrace the selfish nature of being human, in that our own bodies and our own minds are the fundamental lenses through which we can see the world, and we rely on each other to communicate about our unique experiences and to share what we know. As an artist, my aim is to use my art to engage in conversation." Peyton-Levine is known for her multi-media practice and will adjust her materials and methods to address the circumstances surrounding the space. Working with paint, fabrics, flowers, plastics, paper, wood, found objects, often evokes feminine power.
Artist Reception 6:00pm to 9:00pm 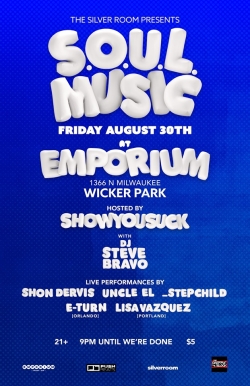 The Silver Room at Emporium Wicker Park
SOUL Music
The Silver Room is bringing together a multi-city, multigenerational slew of DJs & Beatmakers to create a vibe that is true to our history and honors their vision for the future. Hosted at Emporium Arcade Bar by ShowYouSuck, the evening will feature sets by _StepChild, Lisa Vazquez (Portland), E-Turn (Orlando), Shon Devris, Uncle EL , and DJ Steve Bravo.
9:00pm to 2:00am 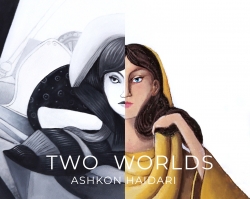 Challengers Comics + Conversation
Let's Make Ramen Signing with Sarah Becan
Sarah Becan, one of Chicago's favorite comic creators, returns to Challengers to sign copies of Let's Make Ramen! Come pick up a copy of this tasty new book, and get it signed by one of its Sauceome authors! Playful and instructive, this hybrid cookbook/graphic novel introduces the history of ramen and provides more than 40 recipes for everything you need to make the perfect ramen at home including stocks, tares, and broths; noodles, toppings, and accompaniments. Authors Hugh Amano and Sarah Becan present colorful, humorous, and easy-to-follow comics that fully illustrate all the necessary steps and ingredients. Perfect for beginners, seasoned cooks, and armchair cooks alike, this comic book cookbook is an accessible, fun, and inviting introduction to one of Japan's most popular dishes!
2:00pm to 4:00pm 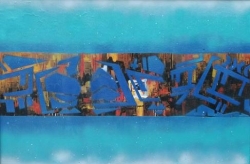 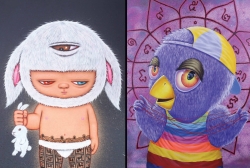 Volumes Bookcafe
Special StoryTime with the Children's Literacy Initiative
Join the Children’s Literacy Initiative at Volumes Bookcafe for a free back to school opportunity featuring Interrupting Chicken by David Ezra Stein.  There will be art, story-time, and a short demonstration on how best to read aloud to your children. Fun for the entire family!
10:00am to 11:00am 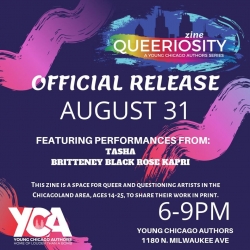 Young Chicago Authors
Queeriosity Zine Release
Celebrate the release of Young Chicago Authors and Louder Than A Bomb's annual zine! Queeriosity is a publicized space for queer and questioning artists in the Chicagoland area, ages 14 to 25, to share their work in print. The evening will feature performances from Tasha and Bee Kapri.
6:00pm to 9:00pm 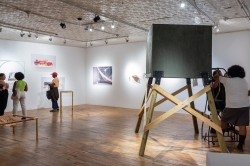 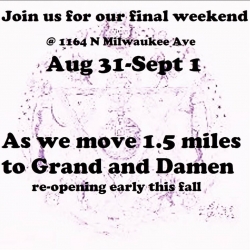 The Occult Bookstore
Final Weekend
The Occult Bookstore, a neighborhood staple for the past 100 years, will be relocating and re-opening as a not-for-profit organization this fall. Come and spend the last weekend of the shop's current iteration in Wicker Park!
Noon to 6:00pm

Wicker Park Farmers Market
Fresh produce from regional agriculture and local prepared foods culminate with a weekly market in Wicker Park proper. Musical performances by Ryan Burns from 8:00am to 10:00am and Joe and the Krikorians from noon to 2:00pm.
Market Open 8:00am to 2:00pm 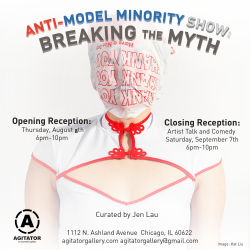 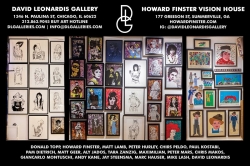 David Leonardis Gallery
August Group Show
The August Group show is up, so come on in or send an email and collect some of the art available at the DLG. There are new art works from their collection of working artists including Donald Topp, Aly Jados, Matt Geer, Dave Alton, Paul Kostabi, and newcomer Larry Singer. 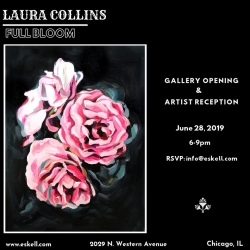 Gallery Cafe
Joshua Rhoades
Joshua Rhoades, landscape and astrophotographer, brings us spectacular compositions from the Midwest. He took third place at the 2019 Illinois State Fair photo exhibition, and he took 1st place at Gallery Cafe. On display and for purchase through September. 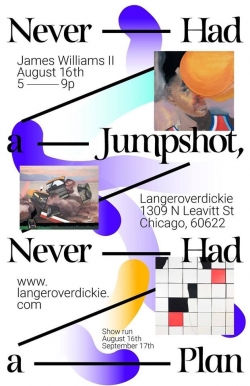 Langer Over Dickie
Never Had a Jumpshot, Never Had a Plan
James Williams II is featured in his solo show Never had a Jumpshot, Never Had a Plan. Williams is a curator and interdisciplinary artist whose work encompasses painting, sculpture and photography. His works center on topics of social and cultural identity in the United States tied together by self-portraiture and narration. During an attempt to make sense of race and visual representation for his five-year-old daughter, Indigo, Williams began to see similarities between her anthropomorphic cartoons and the origin of racial constructs in America, particularly in Black Americans. Anthropomorphized animals and inanimate objects in traditional stories or Disney movies are relatable to children. Williams’ work uses satire and visual riposte to challenge the ambiguity of the black construct as both an object and racial classification. He uses shadows, video, paper, velcro, and sculpted wooden objects to find humor in the inaccuracies and indecisiveness of racial classifications of Black Americans and the achromatic color they both share. 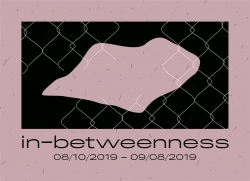 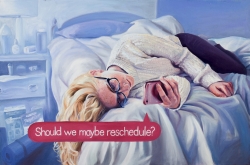 Line Dot Editions
Should We Maybe Reschedule?: Savannah Jubic & Renée Hrovat
Line Dot is thrilled to present Should We Maybe Reschedule? featuring original work from emerging Chicago artists Savannah Jubic and Renée Hrovat. In distinct yet complementary art practices, Jubic and Hrovat explore the anxieties and obsessions of the modern moment through labor-intensive gestures spanning multiple media. Should We Maybe Reschedule? reflects the central tensions of the contemporary human condition, from artificiality to reality, constant interaction to loneliness, excessive consumption to emptiness. Processes such as hand-weaving, oil painting, and embroidery lend materiality to these abstract concepts, opening a space for direct physical engagement with the intangible. Each artist offers an intimate glimpse into their personal fixations and vulnerabilities as an invitation to the viewer to reflect on—and connect with—their own experiences. 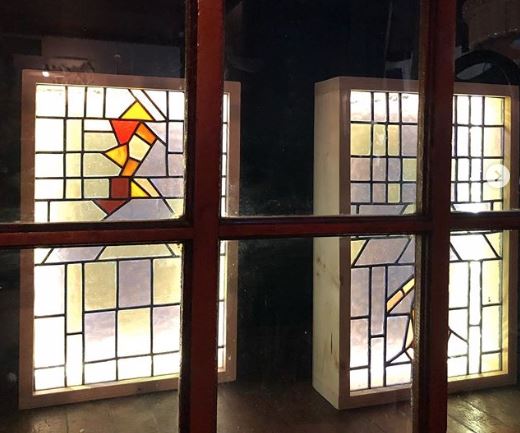 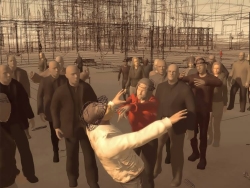