Image Credit: Heavy is the Crown, 2019 by Czr Prz, as seen in Public Spaces, opening this weekend at Jackson Junge Gallery.

It's sure to be a busy weekend for the arts in Wicker Park Bucktown! Friday kicks off the month of May with the usual First Friday festivities and several exciting exhibition openings. May the Fourth be with you on Saturday as the neighborhood also celebrates Free Comic Book Day and the Chicago Print Crawl makes a stop in the neighborhood. There are plenty of other events and happenings as well, and a benefit event for a local gallery! Take a look at our latest WPB Weekend Arts Guide for everything you need to know to get out and support the arts over the next few days... 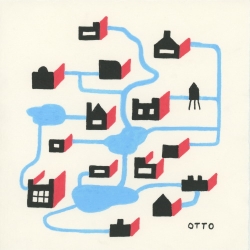 AdventureLand Works on Paper
Drawing by Nate Otto
Join us for an exhibition of drawings by Nate Otto. Pet friendly. Free drinks at the opening.
Opening Reception 7:00pm to 10:00pm

The Dime
Nasturtium
With Nasturtium, Jennifer Shanahan creates a meditation on the ephemeral notions of beauty, impermanence, sensuality, and the passage of time. The Nasturtium, a flower long prized for its beauty as well as being an edible flower, has been an alluring subject for poets and artists for centuries. Jennifer spent three years making photographs that ruminate on this lovely, if elusive, flower.
Opening Reception 7:00pm to 10:00pm 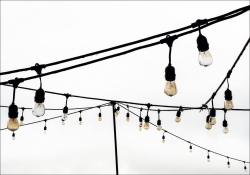 Flat Iron Arts Building
First Friday at the Flat Iron
The Flat Iron Arts Building and Flat Iron Artist Association hold a monthly First Friday event where artists and galleries throughout the building open their studios to the public for an evening of viewing, chatting, networking, and overall inundation of the arts. This presents the neighborhood's most concentrated area of artists studios in the most accessible way possible. The open studios event is free and open to the public.
Studios Open 6:00pm to 10:00pm 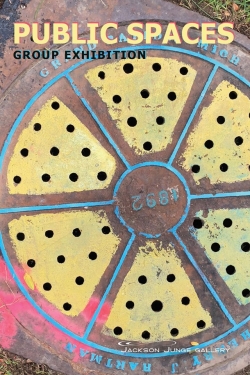 Jackson Junge Gallery
Public Spaces
Public Spaces exhibits an amalgam of artworks created in the studio by artists who are known for making their primary body of work in the public domain. Many are muralists who have left their mark all over the world. Others produce work out in the public domain, utilizing aspects and elements of those public spaces to make their art. Exhibiting artists Ali Six, Ava Grey, Czr Prz, Enivo, Jim Bachor, Jordan Miller, RenO Franczek, Storm Print City, Tony Passero and YAMS have all brought their passion for street art, performance painting, and public practices into a space different from others. Each artist has found their niche out in the public and have brought their work into other avenues. Many have street art and studio work that often connect. With the creation of the new Chicago mural registry, and other neighborhood organizations creating resources for artists, it is an exciting time for muralists and street artists as well as artists making work in public spaces. Public Spaces is curated by Assistant Gallery Director Kaitlyn Miller.
Opening Reception 6:00pm to 10:00pm

Firecat Projects
May the 4th (Be With You): A Star Wars Themed Yoga Class
Put your tauntaun in storage and shake off that carbonite freeze— it’s May the 4th (be with you) yoga time! Join us for a Star Wars themed yoga class taught by Alycia Messenger at FireCat Projects gallery in Bucktown. Go full Force from 12-1:00 pm with an all-levels yoga class. Not well-versed in yoga, are you? There’ll be an optional beginner yoga tutorial from 11:15-11:45. Cool down with an Empire-mosa or a non-alcoholic Jedi Juice after class, and May the 4th be with you! All are welcome to attend, Star Wars fans or not. $30 tickets available now! Proceeds go to benefit the Live Like Roo Foundation.
11:15am to 2:00pm 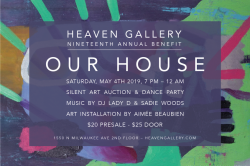 Neighborly
Chicago Print Crawl with Tabor Shiles
An annual, self-guided tour of printmaking production, publishing, exhibition and sales venues throughout the city, the Chicago Print Crawl offers a behind-the-scenes peek into Chicago’s vibrant printmaking industry. 37 eclectic printmaking venues throughout the city are inviting the public to stop by for a day of free activities including studio tours, print sales, hands-on art projects, gallery exhibitions, and printmaking demonstrations. Neighborly will be featuring the beautiful hand-dyed and silkscreened scarves of local artist Tabor Shiles. The event is free and all members of the public are welcome.
11:00am to 5:00pm 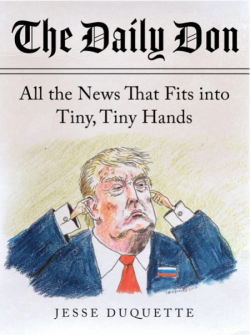 Quimby's Bookstore
Free Comic Book Day with Jesse Duquette of The Daily Don Book Signing
The first Saturday in May is always Free Comic Book Day (yes, we’ll have some free comics all day), and this year Quimby’s also celebrates by welcoming Jesse Duquette of The Daily Don — the popular Instagram which is now featured in a book. The Daily Don collects the best of the first two years of artist Jesse Duquette’s Instagram art project, a gallery of cartoons centered around the Trump administration. As soon as the lies began on Day One of Trump’s presidency about crowd sizes at his Inauguration, Duquette decided the best weapon he could employ against the coming madness was his pack of colored pencils. Jesse’s work has been featured in such places as: The Globe & Mail, TruthDig, MoveOn.org, and Viceland’s “The Hunt for the Trump Tapes with Tom Arnold.” He has also been featured on the“CraftSanity” podcast and was the subject of a Snopes article (verified “True”). Jesse has no degrees or awards to his name but his mother loves him anyways.
7:00pm

Volumes Bookcafe
T.J. Martinson & Michael Moreci
Join us for a conversation with novelists T.J. Martinson and Michael Moreci. T.J.'s book, The Reign of the Kingfisher, is a new staff favorite, and we are excited to bring T.J. here to chat about it. 30 years ago a superhero tried to save Chicago. Now the city is again under siege, in this gritty, suspenseful, and beautifully written novel. Superheroes on May the 4th? We're so excited we are concocting a special drink just for this. Michael Moreci's book We Are Mayhem is the much anticipated sequel to his rollicking space-opera Black Star Renegades, and the second entry in the Star Wars-inspired series that Nerdist calls "the next big thing." Though the ragtag group of misfits known as the Black Star Renegades won a decisive battle by destroying Ga Halle’s War Hammer, the war is far from over...
7:00pm to 9:00pm 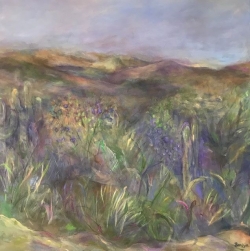 Jackson Junge Gallery
Salt to Sand
Jackson Junge's Salt to Sand is a solo exhibition featuring paintings from Cape Cod and Scottsdale, AZ. These two places are where painter, Benjye Troob, lives seasonally and draws inspiration. Originally from New York, Troob’s artistic career blossomed while living in Chicago. Troob’s style has evolved from predominately working with the figure to a free flowing impressionist style. Salt to Sand, brings both places together in a way that shows the similarities and differences in these two diverse environments.
Exhibition Closes - Final Day 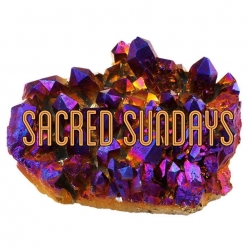 Sideshow Gallery
Sacred Sundays
Shop friends from Shaman's Dream contribute to this monthly pop up at Sideshow. Michael Whitcomb will be in the shop to do aura cleansings and astrological chart readings. Mary will also be in the shop with her extensive collection of crystals. She will be able to answer any questions about crystal attributes and metaphysical properties. Readings will last 45 minutes and be $60. Appointments must be made in advance.
Noon to 6:00pm 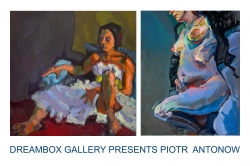 Dreambox Gallery
Piotr Antonow
Piotr Antonow’s paintings combine the elements of abstraction with realistic representation.  His compositions allow the lines, colors, and shapes to come together to define the realistic details of the form, that brings into view a degree of the inner world and the individuality of a subject. Piotr was born in Cracow, Poland.  Early in his life, he began painting and drawing in his parents’ art studio and he continued his studies at the Secondary School of Fine Arts in Cracow. After moving to the United States in 1986, Antonow took classes at the Art Institute of Chicago and privately studied painting and drawing with Gay Riseborough.  He also studied under Eleanor Spiess-Ferris in the Evanston Art Center, where he now runs the figure drawing sessions. 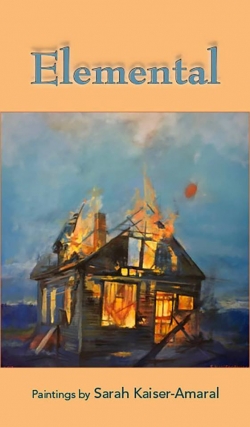 Firecat Projects
Elemental: Paintings by Sarah Kaiser-Amaral
Sarah Kaiser-Amaral's exhibition of trompe l’oeil paintings is a meditation on the elemental forces of nature that flow through us. Fire, wind, and waves symbolize the energy within that compels her to paint. By blurring the boundaries between the figure and the ground, elements begin to break down and dissolve subjects. Stone, wood and flesh melt into the clouds. Fields of blue color emerge just as a storm breaks over the mountains. The paintings are a reflection of time, and the fleeting nature of life. Seasons change, fruit ripens, and memories fade away. This energy flows through the paint, like the swell of a wave that breaks over the rocks. 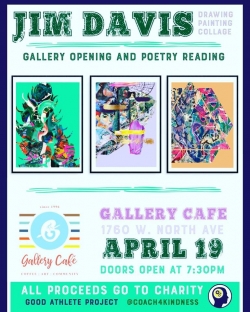 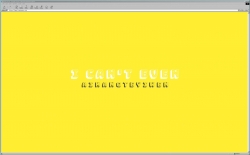 gallery no one
I can't even
I can't even is an online exhibition made up of work from seven artists touching on the characteristics of the Internet in varying degrees, providing new modes of thinking for the new media and the contemporary Internet language. 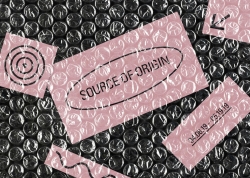 LVL3 Gallery
Source of Origin
LVL3 is proud to present Source of Origin a two-person show featuring Yani Aviles and Wyne Veen. Aviles works through objects and space using experimental material processes to complicate our awareness and challenge the way we receive information. Veen’s photographic and sculptural arrangements question concepts of production and scale in our overly manufactured lives. Source of Origin brings these two artists together to take a look at our perspectives and what it means to be with and without context. This exhibition highlights methods that reconsider platforms for processing information. 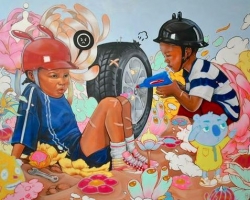 Line Dot Editions
Kayla Mahaffey: Off to the Races
Line Dot is thrilled to present a solo exhibition of new paintings by Kayla Mahaffey, following her sold-out debut show last year. Off to the Races builds on the thematic and stylistic principles of Mahaffey’s previous work, further developing the artist’s unique blend of flat, cartoon elements with brilliant photorealism. 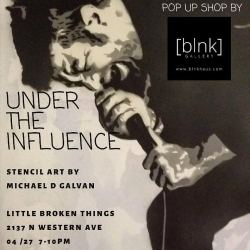 Little Broken Things
Under the Influence
Join us for a metal themed art show featuring stencil work by local artist and musican Mike Galvan and a pop up shop by Blnk Haus Gallery. 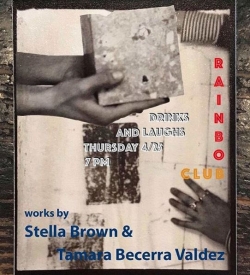 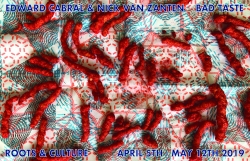 Roots & Culture
Bad Taste: Edward Cabral & Nick Van Zanten with Pete Brooks: Flipso Facto in the Milwaukee Avenue Window
Edward Cabral’s sculptures utilize the aesthetics of industrially processed foods to highlight their importance to American culture and identity. Using a combination of raw materials and the food itself, he pulls from his fabrication background to produce highly crafted objects that fragment the viewer’s expectations. His artwork is meant to blurs the line between industrially processed and industrial goods, and allow humor to be the point of entry for a critique on our contemporary foodways. Nick Van Zanten’s "Formfit" assemblages are entanglements of sewn “paintings,” garments, and their display stands.  Born out of an attraction to gaudy synthetic fabrics, from which he began to make himself clothes, they are designed to evoke a desiring gaze, and their physical form – soft, puffy, and (partly) wearable – begs to be held and touched. Yet they are also abject, being made of cheap fabric, reminiscent of outdated aesthetics, and most often lying unworn. The ‘Formfits’ are repellant and a bit embarrassing even as they draw you in. 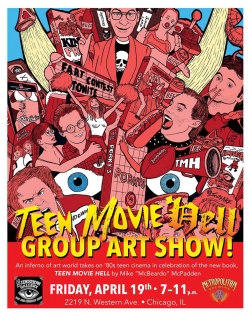 Sideshow Gallery
Teen Movie Hell
An inferno of artistic takes on '80s teen cinema! Curated by Mike "McBeardo" McPadden in celebration of the release of his new book Teen Movie Hell: A Crucible of Coming-of-Age Comedies from Animal House to Zapped! 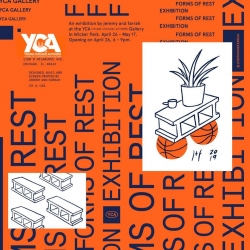 Young Chicago Authors
Forms of Rest
Forms of Rest is a body of work by Jeremy and Farrah based on creating a practice where we carve out time to shut down all the demands, noise, and bright screens in order to focus on an exercise that renews our eyes and mind. Every brush stroke, every shape, and every form are decisive efforts of rest. Each element can be seen stacked, paired, repeated, or juxtaposed with other elements to create a visual narrative of our emotions or mental state.